#5 of Twelve In Twenty-Twelve

Sunday, May 6
Cincinnati, OH
Twelve In Twenty-Twelve #5
Weather – 60s, sunny (I never felt like it was too hot or too humid. Perfect!)

The last time I ran The Pig it was miserable. It poured down rain almost the entire race and that included a lot of thunder and lightening at the start. I swore I would never run it again. Fast forward. 2012. Perfect weather and a wonderful experience overall. This year I approached the finish line thinking, “I’m running this one again.”

I ran Kentucky Derby Mini Marathon the weekend before so running back to back weekend half marathons was a first. I was curious to see if I would  notice a difference in the way I felt or pace.

With a start time of 6:30 Chad and I left the house at 5:00. I love early morning so the early start was fine with me. Chad? Not so much. On the bright side by leaving when we did we avoided the traffic jam…sweet!

Before (Bathroom stop and bags checked. Ready for the starting line.)

Until mile 9 the entire course felt like hills. Nothing to steep but constant. No worries. I managed them better than any other time in the past! Would you consider this a hilly race?

Thoughts on the race:

Chad was using this as training run for his next ultra the following weekend (tomorrow!). He tried out his new fuel pack. Verdict? Not bad but the straps slipped and loosened. Return it? I would. 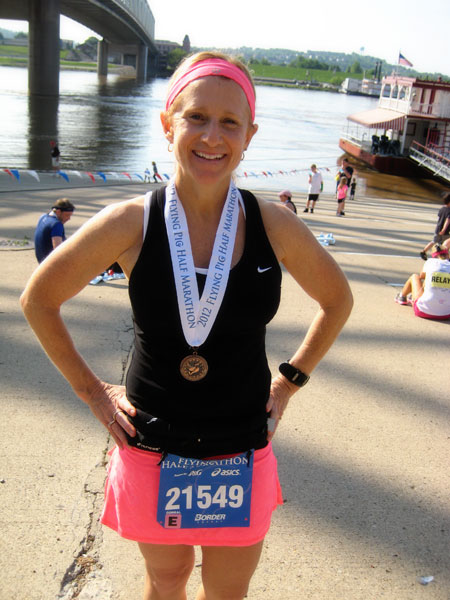 A tech tee that actually fits.

Chad thought it was funny to joke about getting the medal with the pig’s butt as if the other side wasn’t the front of the pig. I couldn’t help but laugh.

After the race I met up with Courtney (another Twelve In Twenty Twelve runner) of  Third Times A Charm at Starbucks.

Say Good Bye To Winter Skin About a month ago I noticed the harsh effects winter had on my skin. Winter was the only thing I could think of that caused my skin to be dry, flat and suddenly showing a lot more lines. The benefits of avocados are many but at the time the benefits…

The Fit Dish is back for another week of the #fitfam and a community that inspires, supports and motivates! New to the link-up? Get the details here → The Fit Dish [Optional] Topic for this week: Does your mind wander? What do you think about when you run or workout? It all depends on when, where and why…

Pin It Just when I considered giving up running out of frustration due to what I thought was an injury I read this in Amby Burfoot’s book, The Runner’s Guide to the Meaning of Life: What 35 Years of Running Have Taught Me About Winning, Losing, Happiness, Humility, and the Human Heart. A quote to remember….

Menu Planning We returned home on Tuesday after a wonderful family vacation that started in the Smoky Mountains (photo above) and ended on Seabrook Island in South Carolina. As amazing as it was I was ready to be home. I didn’t want vacationing and visiting family to end but I was ready to be back to…

I’ve been waiting to see everybody so I could share my news! I passed the NASM cPT exam on Saturday! Cue the confetti and fireworks! Yay! I’m thinking about a how-to pass the exam/study tips type of post. What do you think? So. What’s next? I’m still riding the high from Blogfest and then the…

I missed my Three Things Thursday post yesterday so I give you Three Things Thursday on Friday. 1. Remember how I missed running race #2 of 12 in 2012 in February? As of last weekend that is no longer the case. Jennifer did one of the nicest things anyone has ever done for me. She created…